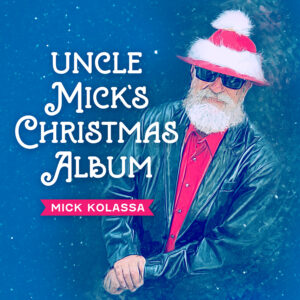 This Christmas album was recorded in the 95-degree heat of a Memphis summer, we thought it would be cool. The album is 100% Memphis, every musician, engineer, technician, and guest call Memphis home. Once again Mick Kolassa teamed up with Jeff Jensen to produce a fun-filled and unique album. Combining some originals with Christmas classics the band put a Memphis spin on everything. Trust us, this ain’t your daddy’s jingle bells!

The album opens with Mick’s take on Mariah Carey’s “All I Want for Christmas is You”. It is delivered in a very Memphis bluesified fashion. Then the band took “Frosty the Snowman” right down Beale Street in a Second Line kind of way. Mick’s original “The Best Christmas Ever” is a fun and funky love song about a very special Christmas present.

The blues classic “Merry Christmas Baby” is followed by a VERY different take on the previously unbluesy “Jingle Bells” – the band brought this song to Memphis in a big way! “Winter Wonderland”, which provides some lightness to the mix, is followed by “Have Yourself a Merry Little Christmas”, delivered with an R&B feeling and featuring Rick Steff on multiple key instruments – including a Mellotron.

Mick’s blues rocker “Christmas Morning Blues” is a story of a Christmas that fell victim to a classic blues problem. The album closes with the band’s “Beale Street Christmas Jam”, in which the musicians each take a shot at fitting a classic Christmas song into a 12-bar 1-4-5 shuffle. All in all, we hope this album is as much fun to listen to as it was to produce!